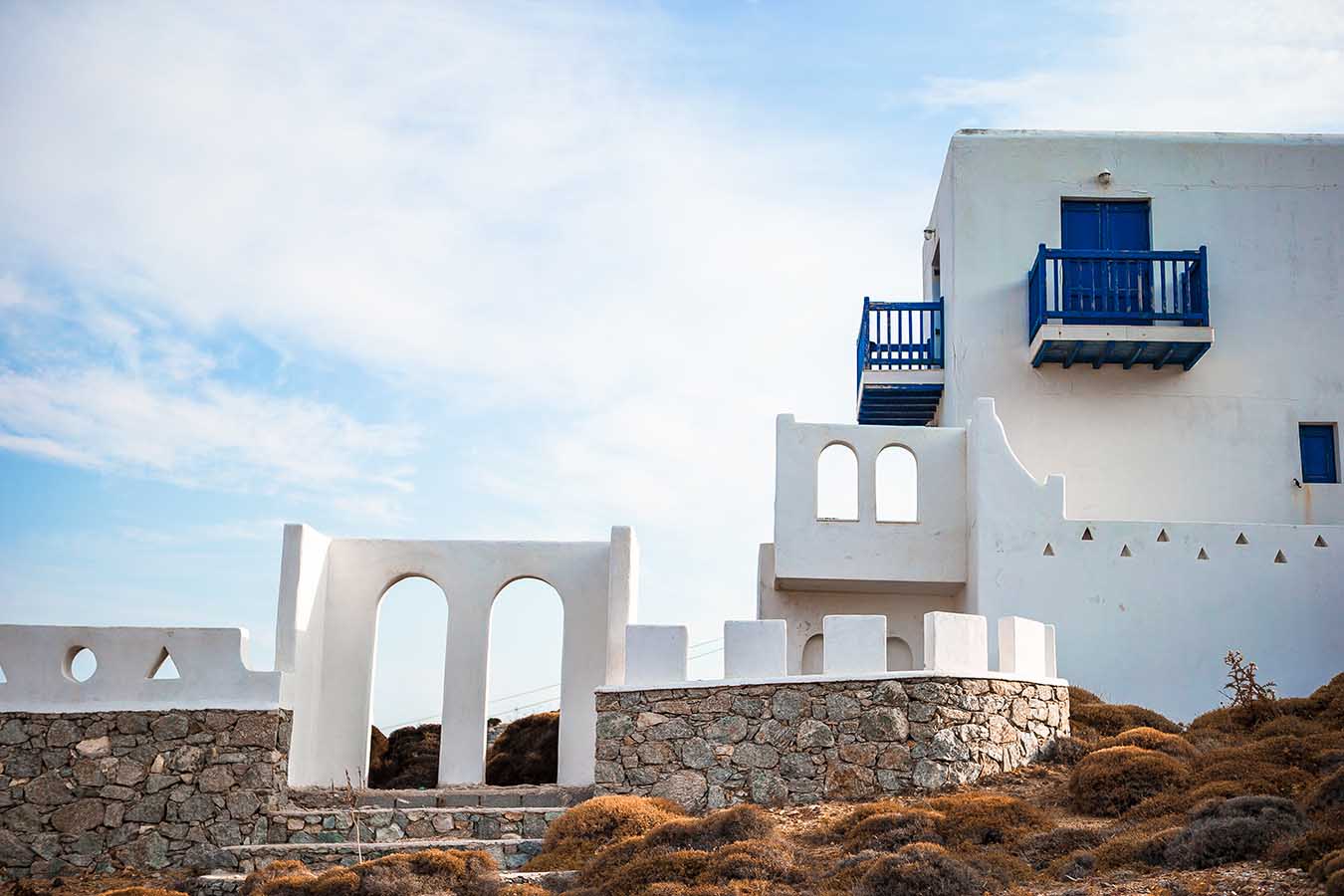 The History of the Cycladic Architecture

Mykonos, much like any other Island of the Cyclades, is filled with buildings of amazing and simple aesthetic, consisting of neutral colors such as white, grey and of course blue. Those signature shades have become known worldwide and the minimalistic buildings are considered to be works of art. One could say that the Cycladic buildings are some of the most photographed ones in the world… A simple browse through Instagram travelling hashtags could easily prove that. The serene and idyllic vibes are a traction pole for tourists from every corner of the world and it makes one wonder, how was the Cycladic architecture born how it came to be!

Practicality meets Beauty
The totally white buildings with the colorful gardens, the stone paved paths and the light blue churches are some of the most typical characteristics of the Cycladic architecture. Most of the buildings are really simple and of minimalistic aesthetics, while they’re also built quite far from the shore and have small windows. That is part of the defense against piracy, which used to be a problem of major importance for the inhabitants of the islands, which is also why on some islands the houses and villages are built behind strong, stone walls. Most of the buildings only have one floor and their timbers never surpass the 3 meter mark, while they are built southeast. The walls have a 60-80cm width and, as mentioned before, the windows are very small with only one of them being on the north side. Traits that came to be, simply due to the fact that the people wanted to keep the temperatures in desired levels all year long, cool during the summer and warmer during winter.

Signature Colors
For the same reason, the color white is also playing such an important role to the Cycladic architecture. Apart from the obvious fact, which is that the colors white and blue are the signature colors of Greece and are also gracing the Greek Flag -in fact Greek Prime Minister Ioannis Metaxas in 1936, ordered for all the Cycladic houses to be painted with those colors to represent the white foam of the Aegean sea and the unique blue of the Greek sky- the color white is also considered to be the less solar absorbent, thus maintaining a cool temperature inside the houses during the summer months. The churches are also an inextricable part of the Cycladic heritage and are also built with the same logic. They’re almost totally white, symbolizing the purity and they occasionally have blue domes, while their beauty is beyond any doubt!

To Each their Own
Even though there is a common theme between all the Cycladic buildings, it’s also true that each and every island has its own characteristic traits, depending on its needs. For example some windmills that were used in the past for grinding grain, can still be found on the hills of Mykonos, Ios and Paros. Though there’s no use for them today, they remain a very beautiful sight to look at and paying a visit would be a wonderful experience.

Taking a look back at the history of the beautiful and most definitely famous around the world, Cycladic architecture is interesting to say the least. So, next time you visit one of the islands of the Cyclades and while strolling and admiring the countless, magnificent churches and buildings keep those facts in mind and check the traits that you can find!

Sign up to receive our latest news and offers!